Irish words and short periphrases with ordering by frequency 'cúpla míle focal' because 'cúpla focal' doesn't cut it anymore :D The deck prompts with an Irish word or short Irish phrase, and provides further context for the word by showing some of the plural, genitive, verbal noun, adjectival and dialectical variations that go with the word. The deck provides buttons for audio pronunciation of the headword in each of the 3 major dialects (audio is played directly from teanglann.ie and is not included in the deck, so an internet connection is required for this part). A button on the answer side of the card takes you directly to the headword definition on teanglann.ie, with another button executing a 'reverse' search on focloir.ie (as focloir.ie is an English -> Irish dictionary). 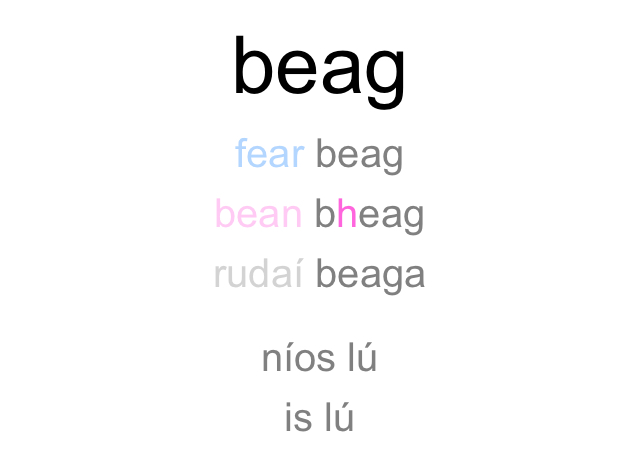 Note: This is an evolution and expansion of the '6500 Most Frequent Irish Words with Audio Pronunciations' deck which was originally compiled by Terry at https://ankiweb.net/shared/info/1975966926. I've added some notes on the changes w.r.t. that deck below: New words & Ordering: Definitions: Front of Card: Back of Card: 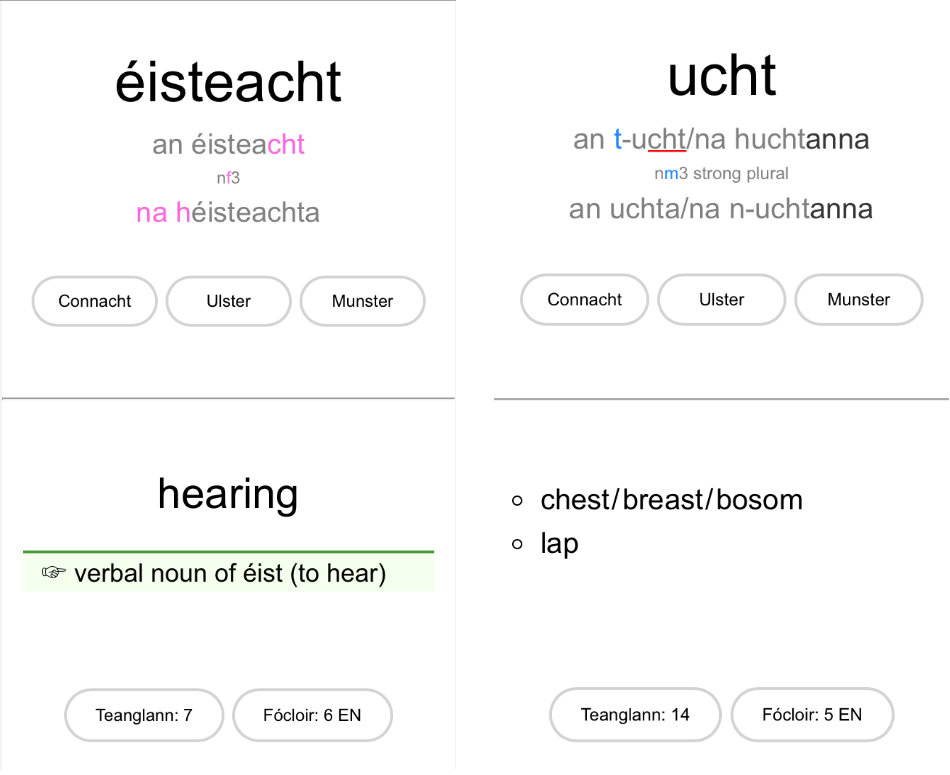 Note on the red underlining In terms of the blue/pink gender hints: when typically masculine/feminine elements of a noun actually disagree with the real gender of the noun (e.g. that a 'cht' ending indicates a feminine noun in the image above), the element is underlined in red to show that it is an exception. There's a github project at https://github.com/eoghanmurray/lookup-irish - errors can be submitted using the Issue tracker there. Bain sult as!

I'm loving this set, it's highly enjoyable and you get a sense of real progression.

Really good! Occasionally there will not be a definition attached to the word as Gaeilge. Any idea what would cause that?

> Would love to see examples of the word in a sentence on the card
Author here;
There are quite a few example sentences already in the deck (around 590 with a quick count); likely you didn't come across them...
If you'd like to contribute, this is the source database: https://docs.google.com/spreadsheets/d/1kiZlZp8weyILstvtL0PfIQkQGzuG7oZfP8n_qkMFAWo
if you can request editing permission there it's possible to add more examples.
I also intend to create a wiki and publish a 'mini-dictionary' at https://cuplamilefocal.ie/ but haven't gotten to that so far this year.

Great to see further detail being added to the original deck!