This is a flashcard deck to learn the most 500 frequent words on the GRE test. 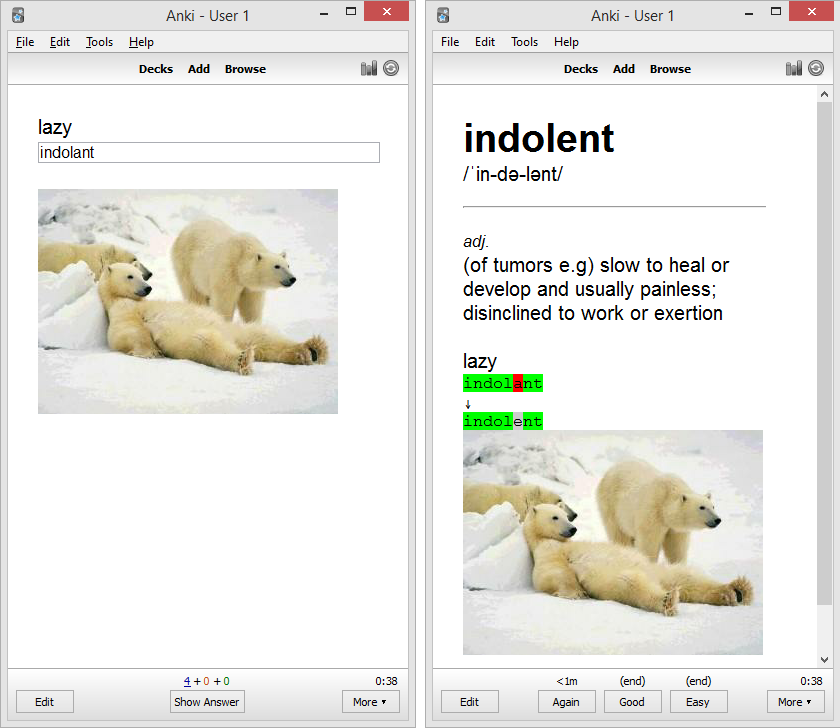 Each card has a front side and a back side. The front side has an empty box, a short description of the word and its image. Your job is to do two things: (1) try your best to write the word into the box, and (2) pronounce it. After that, hit Enter. The card will flip to the back side, and the correct word will appear. The pronunciation will be spoken and your spelling is checked, so that you can learn from your wrongs. The full definition of the word will refine your understanding of the word, so you can use it correctly in writing. After that, clicking the bottom buttons to evaluate the strength of your memory so that Anki can predict when you are about to forget it. If you think an image is meaningless for you and you want to change it, click on it to open Google Images. In your browser, find your preferred image and copy it, then return to Anki. In Anki, click the Edit button, then paste it in the Image field. Another deck of mine to study in parallel with this deck: 40 Independent Speaking Questions for TOEFL Test Tips: These words are meant to express complicated, entangled ideas in a clear, succinct manner. There is no way to remember all of them of course, but you don't need to be an English native speaker, you just need to be a new you. Many of those words require you to have at least a sorrow experience in your life. Half of them are there so that you can have empathy for others, another half of them help you not getting lost into it. Inspiring quotes: If you love this deck and are interested to know more, there are some other articles that you might be interested in too: • The motivation behind this deck • “The best way to learn vocabulary is from context.” Why is that sometime not true? • Making concrete analogies and big pictures

As most of the reviewers have said, avoid this deck. It's a good idea, but it's more ineffective than it is efficient, simply because many of the words can be found in the definition, i.e. giving away the answer. Another thing is that it has too many things—audio, pictures—than necessary, which may suit certain people, but doesn't fit my studying style (as I prefer something simple and clear-cut).

Great deck! For those that don't like the example sentences, just {{Short description}} to {{Full definition}} in the front template settings.

Ok listen up dumb-dumbs, stop down voting this because it's unrefined. It's very easy to fix the slides as you go. If it doesn't have a description on the front end, cut and paste it from the back end under the edit card button (just hit e). If the card has an example with the word on the front, move it to the back. If you're so lazy and entitled that you can't be bothered, you shouldn't be taking the GRE. The time spend fixing the slides is minuscule compared to the amount of time you use a slide for. Deck creator, thank you so much for putting this together.

Don't be misguided by the name, don't download, many words can be found in the example sentence itself. The meanings can also be made more concise and accurate. Some cards don't even have the short description and only an unrelated image (exited the deck after that).

It needs IPA instead of the current transcription method.

This deck has a ton of potential. But as of this date do not waste your time downloading it until it is fixed nearly half of all the vocab words have the actual word in the question making it completely useless.

Had good intentions, but lacks refinement. I just started and of the first five works, two of them have the word in the definition or sentence example. Fix these issues and it will be gold. For now though, will be looking for other resources to use.

Lots of the cards are missing the hints, the definitions are slightly inaccurate, a number have the answer on the front of the card making them pointless. the images are often inclusive of the words, and sometimes the pictures are so distracting they need to be removed to allow the word to have any effect. A study guide should not contain personal bias propaganda.

Very good choice of words. Good explanation. Appropriate usage of pictures for reference. Randomness in the order of presenting words helps in learning through interleaving.

Great deck! A lot of the words are words that appear on many gre lists at a more advanced level. The pictures make it easy to recall. Thanks!

You're often given the word in the definition making it a useless exercise.
Comment from author
Yes, this is what I'm aware of; sorry for your inconvenience. I'll update it if I have time.

Amaaazing way to visualize vocab! It doesn't feel like studying at all, in fact this has become a mind cooler during work, but I noticed that when I see a less familiar word on paper I can recall the image immediately. Some of the pictures are truly priceless :D Fabulous job thank you <3

Gorgeous deck! Definitely worth it!

Great deck with a large deal of detail.

Variations of words should not be in the description

Putting the variation of the word, like the adjective term, in the description makes it useless to test oneself with the flashcards, since the term gives away the answer. Example, the Short description of oblique is:

indirect; slanting (deviating from the perpendicular or from a straight line); Ex. oblique reference

By writing "Ex. oblique reference: the answer is given before you flip the card.

In reverse order but has audio and okay pictures.

This is slightly annoying to learn from as you are given a definition and have to think of the word. The problem is there are usually a lot of words you could give that satisfy the definition. Worse still, on some cards all you are given is a picture and no definition.

On the flipside the photos are usually helpful, and the audio might help depending on how you like to learn.

The pictures help! Thanks for sharing

love the pic of "L" from deathnote
re "No usage examples": agreed. Seems like the author added usage examples to some cards in the "Short description" section
re "Isn't this backwarks [ sic ]": you can switch it up with "Edit" > "Cards..."