This a a kanji deck, but instead of focusing on the kanji only, you learn the vocabulary directly. As such the vocabulary is based on the kanji order, introducting them one at time. I picked KKLC order is I think it's objectively better than RTK. Here's a picture that hopefully makes it clear. 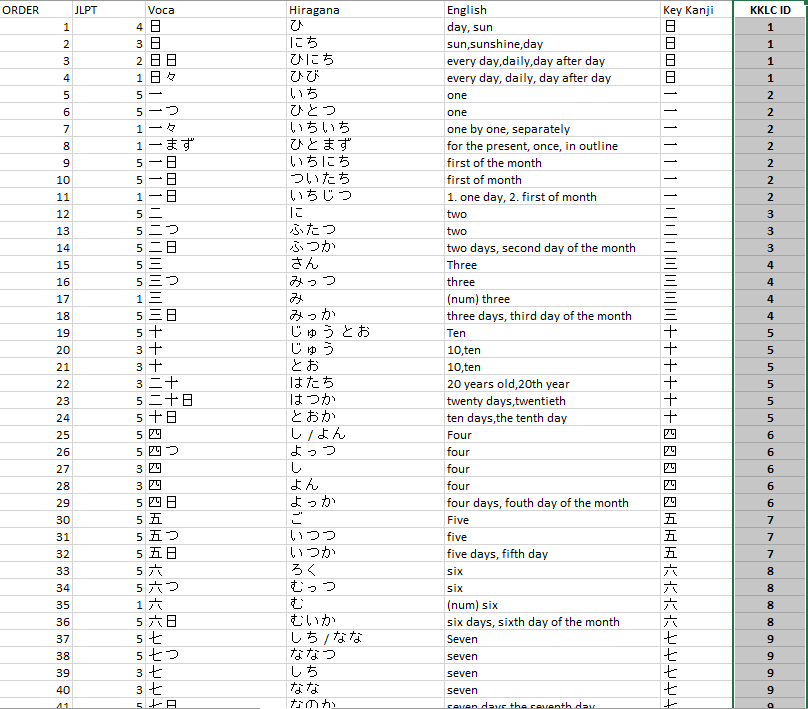 I picked words from the JLPT lists, 5 to 1, 5 being the easiest. Keep in mind there is no official JLPT list, so I based mine on this tanos website. HOW TO USE The deck is basically a JLPT vocabulary deck built on top of my kanji deck. So it may be overbloated in informations. I made it easy to customize what you see in the card by editing the styling section. You'll know which lines display which information and you simply need to add the word "none" in the code to hide that part in the card. If it's still too much you can get rid of the "kanji deck" part and simply use the kanji pop-up window instead. Simply click on the kanji to display the information. Again, you can choose which information to display in the window in the same way. Here's the deck looks:

HISTORY V2 - 02/01/2021 - Card style fixed and improved - Added vocabulary from JLPT levels 1 and 2 - Kanji pop up added V1 - 17/02/2020 Release OTHER DECKS - Study: Kanji, Grammar, Vocabulary. - Reading: Manga (Yotsuba), Games (Pokemon, Final Fantasy, Dragon Quest). - Listening: Anime, Pimsleur. I've compiled all my resources on my website. You can find hundreds of anime, manga, games ordered by difficulty, direct links to their anki decks; links to video-game japanese scripts, guide on how to study japanese, links to ressources for studying, and various tutorials to help you along the way. If you have any issues with deck, use the contact button, or you can reach me on reddit (Jo-Mako) or Discord (Jo-Mako#7531).

Buy me a coffee

Hi! I am fairly new to Japanese, and I have to say that your deck has helped me a lot throughout the learning process. Previously this software has frightened me for a while because of its daunting UI, and you have thrown my fear away! I appreciate your work compiling the kanji alongside its reading, stroke order, and vocabulary arranged by its difficulty level into this beautifully made and well-organized Anki deck. Now I don't have to go back and forth between various sources because it has been compiled in one place.

Before using this deck, I used your Kanji deck, which helped me learn a few dozen kanjis very well. I then considered learning vocabulary and came across this deck, made by the same author of the Kanji deck that I have been using. This deck has been doing as good as the kanji one.

I wonder, though, since you mentioned that this deck is built on top of your Kanji deck, is it fine for me to stop using your Kanji deck and rely on this deck alone for learning kanji and vocabulary together instead of having two separate decks, or is there any benefit in using both decks together? Does it provide kanji stroke review like the kanji deck has? (though I do not personally mind since I hand-write kanji during the review process anyway)

Also, thank you for all your efforts in arranging all this information into a beginner-friendly deck. You are the reason why the internet is great!
お疲れ様でした。
Comment from author
Thanks !

I don't have any advice on the matter. If you do this deck maybe you don't need the recognitions cards of the kanji deck.
Other than that, you're the one using the deck so trust that your judgement is better than mine.

Thank you for the deck. Is it possible to remove JLPT1 words from this deck ?
Comment from author
Yes there is a field for that information.
Go in the browser mode and type: "deck:Vocabulary - Kanji order" Vocabulary_JLPT:1
Suspend all cards.

I think if you turned them into TSC's or put the kanji into sentences it would be a lot easier to rep. I always have to try to think of both reading's because there's no context which one it is.

I tried to use it together with Kanji deck (witch is very nice btw), but it is so bad... Multiple cards with the same kanji, but different readings and meaning (and without context you can't guess which one is on the card you are currently reviewing) and many words where learning them (on this level) seems pointless. I used it for something like 2 weeks with 15 cards per day, but after deleting something like every 4th new card I decided that there is no point and it is better to just switch to something else.
Comment from author
This is disheartening to read.

This is a deck to learn words from the JLPT. If you want to pass the JLPT, then learning them is not pointless.
I understand that may not want to learn them, I didn't either. But it just means that's it's not the deck for you, not there's something wrong with it.

Multiple cards have the same kanji since you're learning them by kanji order. If you're not interested in that information, you can delete the fields or modify the card style.
Some words only differ by readings, which is why it's also given as a hint on the front card, so you can know which word it is even when they are written with the same kanji.

If you have any ideas or suggestions to improve the deck, let me know.

cant run on latest anki
Comment from author
I fixed the card template so the deck can work with the latest update.
You can download it again.

the best I ever seen

Hey, When I try to use this deck in Anki, nothing shows up, only this error message appears: Back template has a problem:
Found '⁨{{jlpt}}⁩', but there is no field called '⁨jlpt⁩'

Is there an add-on or alternate deck I have to download?
Comment from author
Hi, it's because I'm an idiot. The deck had two fields called "jlpt", one refering to the vocabulary and one to the kanji. On export, the field got renamed automatically and broke the card template.

Doesn't matter I fixed the deck, and finally updated it. You can redownload again, it will work.